So, as I was saying, my friend Andrea and I took a walk along the Embarcadero yesterday to see this year's Tulipmania at  Pier 39.

As we got closer we could begin to see some tulips.

But they weren't all that dazzling so we walked on to where the beauty was.

And we saw another box that still couldn't have been what they had in mind to really bring lumps to our throats.

But actually we came to realize that what we were looking at Was the tulip display! 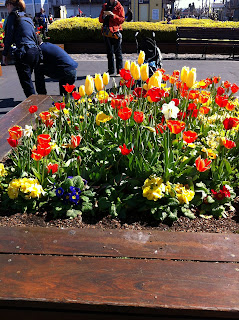 Huh?  Like much of the world,  I LOVE tulips and didn't think it possible for any tulip display to be a total flop - until yesterday.  Primroses and daffodils with tulips?  Weird, unpleasing elevations, just yellow and red?  Disappointment reigned.

But only for a moment because this is San Francisco - and within yards of the failed tulipmania was ...The Musee Mecanique. The Musée Mécanique, an interactive, publicly available museum that houses one of the largest privately owned collections of penny arcade games in the world. To enter is to go back at least 100 years and to have a blast!

And the Saw Mill

And any number of ranches, barn dances, buffalo pastures, car rides, photo booths.  So we played around like we were kids at that Amusement Park we used to hang out in.  Strolling around, laughing at ourselves, having old timey fun until it was time to start walking home.

And on the way home I thought the tulips in one of my neighbor's street garden was much prettier than Pier 39.

And my own little bunch of tulips from Trader Joe's was prettiest of all. 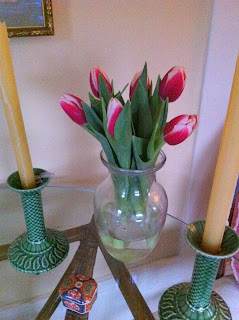