Another 'summer' day in San Francisco, so headed again over the Golden Gate first to Peacock Gap, 40 minutes/23 miles from the city, to hit another bucket of balls.  (Possible CIWT entry on that coming up) Then remembered a couple of Marin roads/sites I've never been on/to in my over 40 years of living in the Bay Area. 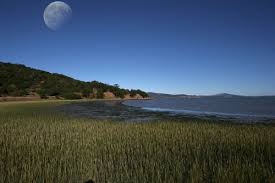 A Chinese shrimp-fishing village thrived on this site in the 1880s. Nearly 500 people, originally from Canton, China, lived in the village. In its heyday, there were three general stores, a marine supply store and a barber shop.

Fisherman by trade in their native country, they gravitated to the work they knew best. Over 90% of the shrimp they netted were dried and shipped to China or Chinese communities throughout the US.  The museum at China Camp Village helps tell the story of these hardy shrimp fisherman.


The second is closer to the city, the Paradise Drive Loop, or as bikers might say 'P-Loop' or Ploop, one of the most popular Bay Area rides.
http://community.sportsbasement.com/archives/paradise-loop/

The names of the roads that intersect with Paradise Drive are often variations on Eden, Valhalla, Heaven's Gate so you can imagine the views are spectacular and varied.  Must a be exhilarating to ride in such beauty.  But since I was driving, I also found it a bit white knuckle because the road is narrow, the shoulder is soft, the curves are blind and the riders are many.

So much for my two hours in Paradise-Eden, time to head back over the bridge to 'summer' in the city.