Returned to the Impressionists on the Water show at the Legion of Honor today, and began thinking of two French artists.  One, Modigliani, was born in Italy but did most of his artistic work in France.  Actually born into a bourgeois Italian family fallen on financial ruin, upon reaching Paris he spectacularly abandoned all genteel trappings and cultivated a reputation as both an alcoholic and drug addict.  He was both, but seemed to revel in his debauchery rather than mask it.  He fathered a child but didn't marry, and when Modigliani died of the addictions and a lingering lung disease at age 35, his je ne sais quoi/common law wife (?) (nine months pregnant with their second child) killed herself the next day.  A dark,sad, tormented life whose tragedy went past just himself .

The other artist, Gustave Caillebotte, was also born into a bourgeois family, but his was exceedingly wealthy on both his father's and mother's sides.  Vis-a-vis the arts, he used his wealth to patronize many of the Impressionists who were his friends.  To become a renowned skillful sailor and boat designer.  And to hone his considerable talent as a fine artist.  (In my opinion, he stands as tall if not taller than any of the Impressionists.  Another entry maybe).  He never married, also died quite young at 45 a noble soul all the way through.  Thirty six paintings from his extensive collection form the core of the Musee D'Orsay's Impressionist collection.

No artist's biography is that artist's work.  Mistakes of understanding are made this way.  But the bare bone facts of these two artists lives did capture some part of my mind today.  We'll see what might come of that.  Always a provocative experience looking at art; unexpected encounters... 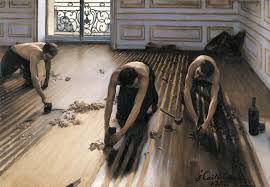