So now Ciwt has seen the animated Disney, the ballet, the opera and today's modern/psychological new movie of Cinderella.  The latter wasn't all that modern so the Cinderella story is essentially the one we know.  The movie is a bit uneven but punctuated by many wonderful moments: Helena Bonham Carter as the Fairy Godmother 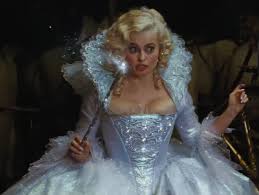 for one and the coach 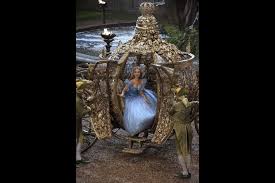 turning back into a pumpkin

for two.  Also fine acting by Cate Blanchett and Derek Jacobi, some delightful nods to the original Disney movie, and you won't be as likely to cry Eeeek when you see your next mouse.

Kenneth Branagh (Director) keeps all ages engaged, but never lets the movie totally transport the adults.  (Ciwt can't speak for the children in the audience, but they were quiet).  For Ciwt, Diana and Charles, Princess Grace and some of the real princess stories we're aware of by now hovered out of sight but in her consciousness.  So, when she returned home, she was happy to see Callie and didn't feel the least gypped that her Prince wasn't there.
Posted by Ciwt at 6:43 PM