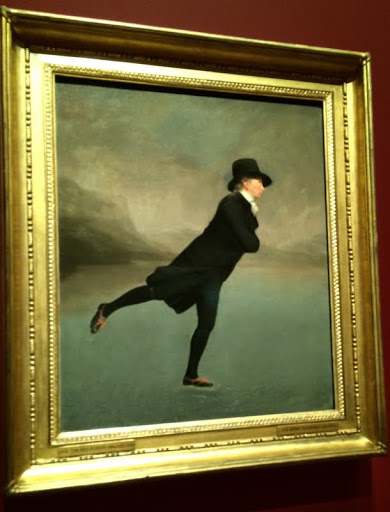 So, what's not to like, starting with the complex and softly glowing colors?  Sir Henry Raeburn was Scotland's premiere portrait artist, entirely self-taught and electing to stay in Scotland for his entire painting career and life.  Such was Scotland's gain.

Ciwt found the de Young's description of this special painting to be excellent (statue added): This portrait of Robert Walker, the minister of Edinburgh's Canongate Church and a leading member of the city's highly selective skating society, is regarded as an icon of Scottish culture and one of Raeburn's greatest achievements.Walker's balletic pose overtly recalls the Renaissance sculptor Giambolgna's famous statue of Mercury in flight , while it also illustrates a sport increasingly popular among the city's elite.  Raeburn's inventive spontaneity extends to the painting's foreground, where he painted a dense network of hatched lines that represent the grooves made by the skaters on the ice.