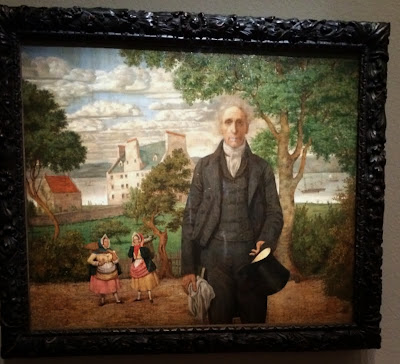 What have we here?

After traveling by the paintings in the preceding entries as well as many other tranquil masterpieces, Ciwt was taken aback by this unsettling painting. Certainly unlike the proud, resplendent full length Clansmen portraits in the room before it, and, to Ciwt's mind, creepy wherever encountered with its gaunt, staring figure, unsettled sky, and odd perspective.

As it turns out the painting was done while the artist, Richard Dadd, was an inmate at a psychiatric facility and is a portrait of one of his doctors.  One wonders what he actually thought of his physician in this recuperative environment.  Dadd had been in one years before when he was diagnosed to be of unsound mind and taken by his family to recuperate in the countryside.  That was early spring 1843, and in August Dadd became convinced his father was the Devil in disguise, killed him with a knife and fled for France.  En route there, Dadd then attempted to kill a tourist with a razor.  At this point he was returned to England where he was committed to psychiatric institutions and put under the care of various physicians including the esteemed Sir Alexander Morison above.

Knowing this, Ciwt wondered why Dadd's work would be purchased and displayed by the Scottish National Galleries.  Apparently Dadd was a renowned artist in England before his drastic mental collapse, and was encouraged by his doctors to continue his painting while institutionalized.  It was in his various hospitals that Dadd created his most celebrated masterpieces full of obsessively minuscule detail such as The Fairy Feller's Master-Stroke (1855-64) which hangs in the Tate Gallery: 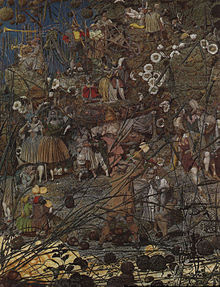