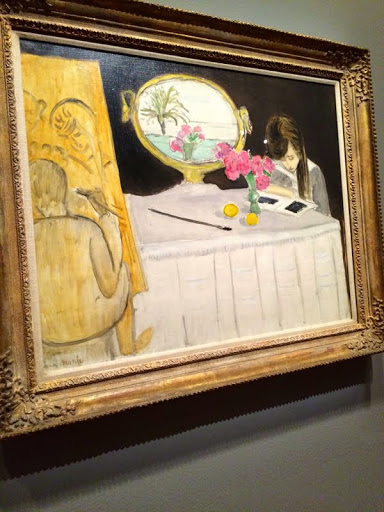 No, for instance the painting above which to her lacks much life or resolution.  It seems more studious; like Matisse had something on his mind he was working out.  The washy, uniformly undifferentiated artist/self portrait indicates to Ciwt that Matisse was not trying for a finished work but working through an unfinished concept. This is reinforced for Ciwt by the fact that the artist in the painting is looking away from the apparent subject, the girl at the table with the mirror and still life. His attention is not on her but on a Madonna type figure which he is loosely roughing out. And both he and she are portrayed in gold tones often associated with the Orient.  Perhaps Matisse, now in Nice and becoming deeply aware of and smitten by the Moorish Occidental and African cultures, is sharpening his turn away from Western perspective and toward abstract form and essential color.

In any case, Matisse appears to be a man of two minds here.  This would be completely in character as he was obsessively driven to work and continually called by - he might say at times at the mercy of - creative artistic sirens.