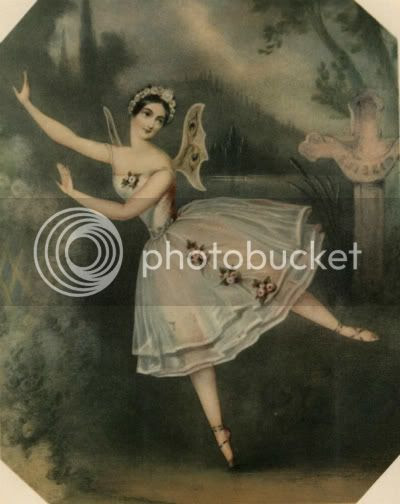 Fresh off her afternoon at SF Ballet's Don Quixote, Ciwt's mind has turned to the tutu.  The garment's origin is mysterious, but it showed up memorably in an 1832 Paris ballet performance and soon became standard wear for ballerinas.  It also soon acquired a dual significance.

On the one hand, it was light and graceful emphasizing the airiness of the dance and ethereal beauty and lightness of its dancers who flitted across the stage like sparkling sprites and princesses.  But on the other hand, the tutu revealed the leg, which at the time was scandalous, so the garment was immediately controversial.  Furthermore, while the the famous ballerinas enjoyed a celebrity lifestyle, their attendant fairies and princesses on stage were mostly poor, low class girls in reality.  On them the tutu went a long way to transform them into sexual objects. Solicitation of ballet girls by rich and influential gentlemen of Paris (and often their acceptance) became institutionalized.  Probably it is no coincidence that the skirts became progressively shorter and stiffer.

Interestingly, this garment made it to the runways in Spring, 2011 when an attempt was made to revive the couture House of Worth.  One of their earliest collections featured none other than the tutu.

Lovely, and surely very costly.  But...Where, By Whom, To What would these be worn? Ciwt was not surprised to learn that the fashion part of the revived House of Worth has been discontinued while the fragrance division remains. All of which will eventually seque CIWT into the original enormously successful and multi-generational House of Worth.  Stay tuned....
Posted by Ciwt at 6:06 PM