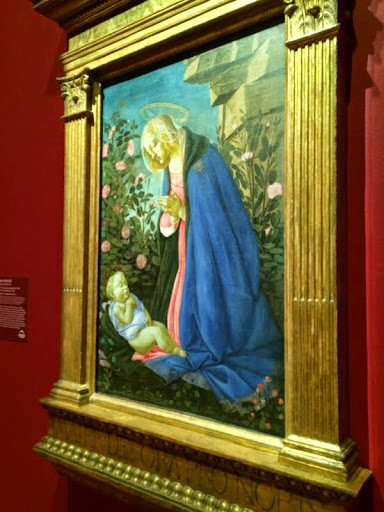 Goodie, Goodie, the art loving part of Ciwt is Happy to announce the de Young has an outstanding collection from the National Galleries of Scotland on view and, at last, a new reason to return again and again. Exceptional, virtually all masterpieces, almost took Ciwt's breath away.

Ciwt wasn't sure where to start writing, but then thought "The Early Italian Renaissance of course - and one of the most celebrated masters." Also one of the first paintings/masterpieces in the exhibition.

Like most people when Ciwt thinks Botticelli, she thinks Birth of Venus   or
Primavera  both beautifully dramatic allegorical paintings.  So she was arrested and moved upon encountering his exquisitely quiet and tender Wemyss Madonna.  Where has this painting been?  Why out of the history books?

Well, it turns out Ciwt was not alone in her unawareness of this Madonna - which Botticelli himself considered his masterpiece.  The artist's judgement did not gel with that of a couple of influential art historians, particularly the renowned Bernard Berenson who pronounced it a workshop copy.  It is even speculated that the famous art advisor to millionaire collectors made this pronouncement in order to reduce the price.

Berenson was not able to buy it, but the painting was relegated to virtually obscurity in a remote Scottish estate until a Christie's expert visited it in 1980 and realized immediately what he was looking at: the best Botticelli he had ever seen.  And that was with many coats of yellowed varnish!  As the masterpiece revealed itself in the slow, laborious cleaning process, its brilliant colors and serious, melancholic presence became more and more evident. This to the point where the conservator working alone, patiently and closely with it not only uncovered one of a handful of authentic Botticelli signatures but began to feel he was encountering a sacred moment. For good reason.

From Botticelli to Braque at the de Young