The first day of the SFIFF took Ciwt all the way to .... New York City.  Yes, not so international, but the clothes, costume jewelry, fabrics, and array of bling was from all over the world.  All of it, filling a warehouse in New York and apartments in New York and Palm Beach, was collected by the 'style' maven, Iris
Apfel 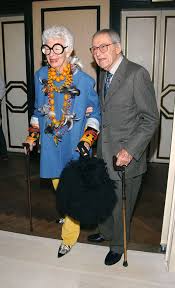 and her husband, Carl.

Fashion has energy as do color, baubles, and brassiness whether inanimate or animate like Iris herself.  From at least her early teens, Iris grabbed onto that energy and has never let go for 93 years and counting becoming a collector, textile designer, interior decorator, international traveler and now fashion educator to young, aspiring fashion students. 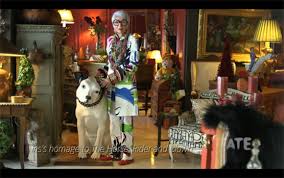 Legendary documentarian Albert Maysles followed Iris for a year capturing her zaniness, glib wisdom, relentless energy, apparently high spirits, skill at haggling, and of course all her possessions.  It's all quite jaw-droppingly material, but after waiting in vain for some depth or ideas to chew on,  Ciwt became a bit uninterested.  Like spending hours wandering around Harry Winston or the designer department of Bergdorf's; what's there to think about after a while?** 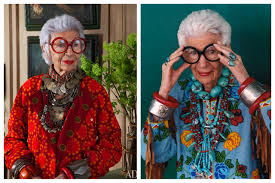 (PS - This didn't happen in the similar 2010 documentary on Joan Rivers, Joan Rivers: A Piece of Work which had more soul with the bling).

* The term she coined for herself and a classic example of her likably relaxed, casual, self-aware wit.

**At one point, Carl sort of slipped and was about to tell some stories about how difficult Jackie was during the re-decorating of the White House.  But he was immediately hushed up.  Too bad; that could have been fun.