With all the publicity we get about the drought, there's so little mention of how absolutely gorgeous it is out here these days - and that the Iris douglasiana is blooming like mad in the Presidio.

A few facts: Iris was the Greek goddess of the rainbow and messenger of the gods.  She is also known as one of the goddesses of the sea and the sky....  Iris douglasiana blooms from March to July and is a common wildflower of the Central, Northern regions of California and Southern Oregon.  It was first described in Monterey, California by the 19th century botanist David Douglas....Clumps are often a single clone and be hundreds of years old.

California Native Uses: One of the most important sources of rope, fishing-net, basket-making fiber in northern California for a large numbr of tribues.  The Pomo and the Klamath in particular used fibers from the edges of the leaves to make a strong rope. They removed the strands on the edges and cleaned with a sharp tool made from abalone shell fastened to the thumb. 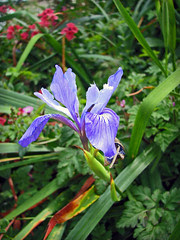 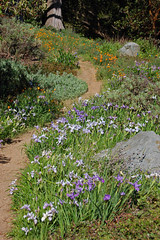