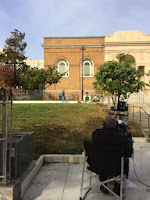 . The Presidio Branch of the Library*.  She came home, wrote about it in CIWT 4/16, then forgot completely about it. Until she was a little way into today's movie, Diary of a Teenage Girl.

From watching the filming at the library that day and hearing the title, Ciwt got the sense it was a breezy, young adult affair. Affair it is, but certainly not breezy. Nor does it work entirely. But the material is complicated to say the least and is handled with an intelligence, thoughtfulness and skill that raises the bar uniquely high for truthful, female coming of age movies.

It takes place in the 1970's when San Francisco still has a slight lingering whiff of of the Haight-Ashbury summer of drugs and free love. It's not a happy, pretty San Francisco.  The City's colors are inaccurately muted, and the sets are nothing you want to cozy up to whether they are indoor in very real houses, bedrooms and bars or outside in mostly nothing places. There is something continuously off-putting and uncomfortable going on, and Ciwt realizes this discomfort is just what the director and cinematographer had in mind.  It echoes the way the viewer feels sitting in the theater watching the movie.

The teenage girl in question is artistic Minnie in full pubescence while being 'raised' by a 'fun-loving' party-girl mother and the mother's man-child boyfriend.  The divorced father is across the country in New York, which is about the only boundary set in the movie.  In the midst of this free-wheeling pharmacologist playground of a home life the teenage girl and the 35 year old man-child begin having a real sexual relationship mostly at the man's apartment.  And in a non-moralizing, non-judgmental, overtly sexual but not erotic way the film lays out Minnie's struggles to reconcile the many traumas, difficulties, confusions of this complex situation with her new, intensely felt sexuality and emerging sense of personal womanhood and adult identity.  If such a description appeals to you, Ciwt says go. Obviously it's not for everybody. (PS - But it definitely is for Aline Kominsky-Crumb fans)

The Diary Of A Teenage Girl 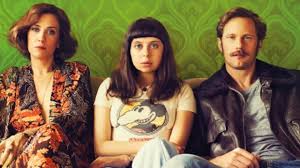 *For a little more about the Presidio Branch Library look way back at CIWT 2.
Posted by Ciwt at 6:16 PM