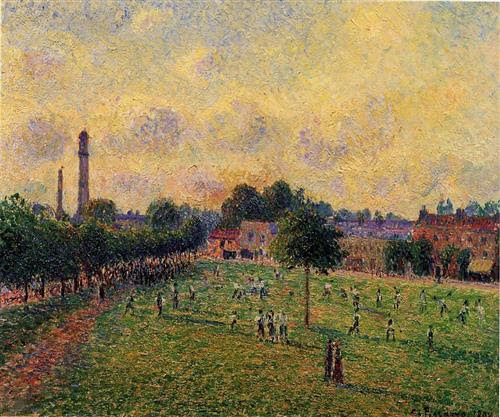 Ciwt thinks it must be late summer in London when Pissarro used his brush to capture men and women enjoying the remaining outdoor leisure before winter rain, chills and grey set in.  (He first came to London in 1870 seeking refuge for himself and his family from the Franco-Prussian War.  After that he returned several times).  Ciwt also surmises Pissarro was comfortable with this later time of year as he was with the later years of life. After age 40 he wrote, "I began to understand my sensations, to know what I wanted, at around the age of forty - but only vaguely."  Then during his 60th year he said "At fifty, that is in 1880, I formulated the idea of unity, without being able to render it.  At sixty, I am beginning to see the possibility of rendering it."