At Illuminations, the Legion's current little show of 18th and 19th century English works on paper, Ciwt was reacquainted with a lovely oil she had once written a paper about.  Here are both. 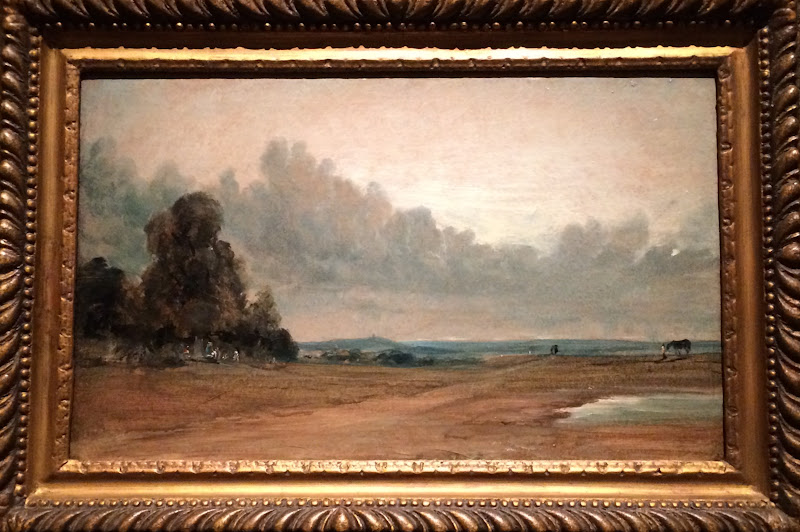 From 1819 to 1826, John Constable rented a summer house at Hampstead where he meticulously observed and recorded cloud formations, weather conditions, and natural light effects; he believed an accurate rendering of these constantly shifting elements could transmit the vitality and freshness that was so important to his vision of the English countryside. (1) What Constable aimed at, above all, was to capture the freshness and sparkle of nature. Before his time no painters had dared to paint the full strength of nature's greens, and in the process of picture-making something of the life and scintillation of nature had always been lost. It was in his small sketches painted in the open air that he first achieved this dewy freshness. In them the direct vigor of his disunited touches conveyed exactly the glitter of light and tremor of atmosphere which earlier painters had missed. (2)

In this oil sketch of Hampstead Heath (an ancient park in the north of London, covering 791 acres*), Constable captures the effects of a windy late afternoon as a rainstorm moves in on billowing clouds.  In the foreground of the painting a diagonal path begins and splits the canvas.  Following the lower, backward moving half of the diagonal, the eye heads back past a pond, its white caps rolling up to shore and out further toward a horse and dismounted rider, then further back to two women ramblers, and sole final rambler. In the distance lie ’s hills, the spire of St. Mary’s, and cirrus clouds that appear to carry rain.  The left or top diagonal teems with more natural activity: Huge billowing clouds rush forward obscuring the setting sun (and light source of the painting) and the leading tree in a clump of strong green oaks leans back toward the viewer, apparently permanently windblown.  Anyone of any era who has ever contemplated or a walk on such a day knows the probable temperature on their skin, the feel of the wind pressing against their bodies, the scurry to shelter as rain arrives.

Constable’s brushwork here is soft, washy, loose and indistinct.  It captures the quickly changing atmospheric effects and carries the spirit and mood of tidal movement and a strong maverick wind blowing clouds, trees and ramblers.  And it plays with light, underpainting the clouds with a soft peach, creating creamy froth on the waves, and catching things here and there with occasional and unexpected dots of pure white.  This energizing use of pure white was so unique to him it was called “Constable snow.” Overall, Constable’s fluid, energetic, inventive, and free use of oils in his sketches has encouraged some critics to prize the sketches on paper even over his finished, larger oils.  Constable himself almost never parted with the sketches, and they passed to his children through his estate. (3)

Even though he was formally trained for a few years at the (1799-1802), much of Constable’s technique was unique and self-taught.  Probably the training was of limited use to him because he had determined in his teens that he would paint his beloved countryside of and the ability of anyone in the would have been limited because English landscape painting was in its infancy. Constable never traveled abroad – or even far from his childhood home in – although he had access to artwork by the 17th C Dutch landscape artists, and Claude Lorrain among other artists he trained himself by copying.

Perhaps ironically for one who did not go abroad, it was the French who most appreciated his work which was known in . Several works were exhibited and sold in Paris, notably The Hay Wain, which won a Gold Medal at the 1824 Salon.  Eugene Delacroix especially admired him calling him “one of the glories of ” and adopting to some extent his loose, unbroken handling of paint.  But Constable’s principal influence in was much more far-reaching particularly to the group of landscape painters whose interest in naturalism and plein-air painting provided one of the strongest foundations for Impressionism.  Along with William Hogarth, Thomas Gainsborough and JMW Turner, he was one of the first great English painters of the 18th and 19th centuries, and arguably one of the greatest landscape painters in the history of Western European art. (4)

*Hampstead Heath (locally known as "the Heath") is a large, ancient London park, covering 320 hectares (791 acres). This grassy public space sits astride a sandy ridge, one of the highest points in London, running from Hampstead to Highgate, which rests on a band of London clay. The Heath is rambling and hilly, embracing ponds, recent and ancient woodlands, a lido, playgrounds, and a training track, and it adjoins the stately home of Kenwood House and its grounds. The SE part of the Heath is Parliament Hill, whose view over is protected by law.  (Wikipedia, “Hampstead Heath”)  At the time of this painting, the Heath was much smaller (ca 313 acres) and source of many springs, including iron-impregnated medicinal waters which became know as the Wells.  It became a desirable place to live when taking the waters, and the unimproved, rough moorland of  the Heath was being encroached upon by developers.  Encroachment continued until the Hampstead Heath Act of 1871, and, since then new acreage has been added although most of the additions have been farmland or parkland and lack the moorland character of the old heath. (Jane Rosoux, www.hampsteadramblers.org.uk)