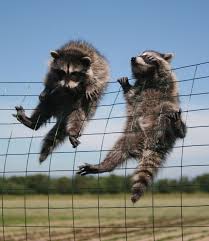 Here's an 'almost there' image that brings chills to Ciwt's heart.  Has she told you about coming home and finding a mother raccoon and her three babies in her kitchen?  Everything out of the cupboards and all over the floor, Ciwt's cats nowhere to be found.  Babies scurried away out the back door (whew), but Mama decided to defend their new food source (ie, my stuff) and started swaying, growling, fiercely watching my every quiver.

Ciwt stared back just as fiercely and for some prehistorically determined reason prevailed; Mama turned and lumbered toward her babies out on Ciwt's deck.  Then she led them out the deck door and straight down the outside of Ciwt's building - at least four stories, straight down the side.

Ciwt watched amazed and so happy she wasn't a mini example of the bear scene in Revenant - because, turns out,  raccoons are direct descendants of bears.
Posted by Ciwt at 8:13 PM