Walk: Up and Down a Huge Neighborhood Hill (with pt; his idea; scary but good to have done)
Distance:  4 Major Blocks, 3 x Stairs, Bunch of exercise/Flexion (also scary - and good to do) 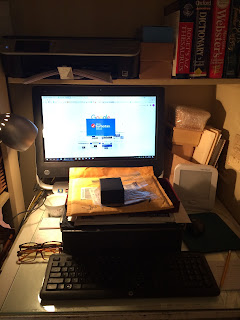 So, Ciwt has done her own taxes for decades.  She's learned to take extensions because necessary documents arrive later and later these days.  When she does file - and this is very important to her taz ritual: she puts her forms into envelopes, takes them to the post office and mails them registered/ return receipt.

She was right on schedule this year; taxes tallied and paid, extention filed, late documents in her possession, forms in envelopes to be taken to the post office.  And then she fell, ended up in an immobilizer essentially under aerie arrest - and far, far from any post office.

The only way she could file on time - and avoid actual arrest - was the dreaded and distrusted by her E-filing 👽 . But, as the deadline drew closer and closer and she got nervouser and nervouser, she began to ask trusted tech friends about their e-filing horror stories.  Instead all she received were reports of "really convenient," "been doing it ever since it became available," "my excellent and very conservative accountant always e-files."

Now Ciwt began feeling like she did when she was late getting an iphone - kind of like those old people who don't have call waiting.  Ie, arch.  Plus, there was that deadline.  So she turned on her computer, opened Turbo Tax, closed her eyes (metaphorically), hit send.  And that was it; done; just like that; from home, on time; ahead of time actually.

When she finished, she remembered mobile banking.  She downloaded her bank's app, took a picture of the front and back of the check, she simply couldn't figure out how to deposit,  pressed the "Deposit" button and E-deposited it!  From home, lickity split.