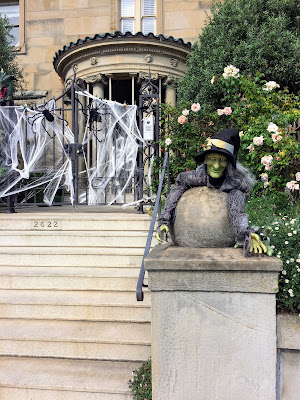 So, when she finally went out into the world the other day, one of the first sites Ciwt enouncountered was this.  Having lost her sense of dates, and with all the fires and the residual creepiness from her fall, she was like "Whaaa?!" Then she remembered, oh, yah, Halloween month.

A few days later she walked by this same house with her friend who pointed out the truly scary thing about this scene.  See the skinny white poles by the thick 'Greek' columns?  They aren't decoration; looks like they are what supporting the entire portico.  Sandstone portico, that is.

Several of the early grand mansions and public buildings of San Francisco were built of sandstone, often, like the house above, emulating classical Greek and Roman architecture.  The stone is relatively soft, easy to carve into block or more artistic forms, and ages to a pleasing buff color. It has been used widely around the world since prehistoric times for domestic construction, temples and monumental buildings so it is easy to see why the new San Francisco millionaires would have wanted it for their homes (or in the case of Leland Stanford for the university he built to honor is deceased son).

Unfortunately some sandstones have been found to be less resistant to weathering then others. And in general sandstone is sensitive to repeated wetting and drying.  So, beautiful as our sandstone edifices out here in San Francisco are, many - including the columns in the Stanford Quad - show evidence of significant crumbling.  In Stanford's case, the culprit has been sprinklers but in San Francisco the deterioration is due to our near daily fog which rolls in wet during the evening and then pulls back during the day while the city dries out.

If caught in time and maintained, all will be well - with pillars maybe looking a bit more ancient with and not quite as wide.  The skinny white ones will be removed when the original columns have been repaired with modern materials.  Maybe the witch will stockpile them for rugged broomsticks.