Walk: SFMOMA (Andy Warhol from A to B and Back Again)
Distance: 2 Miles, Yoga Somewhere 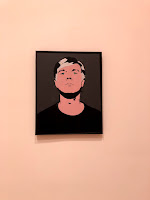 You know the rest of these iconic images: 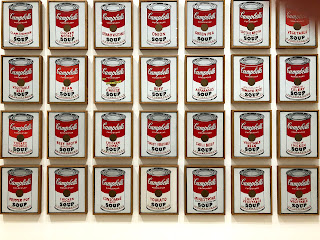 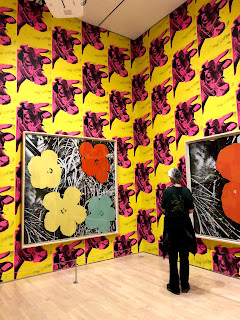 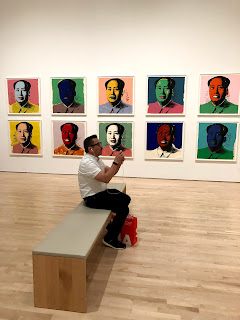 Ciwt has to admit there is an undying fascination with Andy Warhol.  No matter that he has been over-exposed in museums, galleries, posters, coffee cups, postcards, tee shirts, pillows, umbrellas, you name it from Here to Timbuktu. There is still no 'over' with Warhol. And honestly that is for good reason: he revolutionized the art world so completely that no one has opened new territory or topped his sweeping impact yet.  Almost 60 years later, modern art is still in the age of Warhol.

'He' just finished a blockbuster show at the Whitney in New York; now he and his show are here at SFMOMA. And it is  a emarkable exhibit: deep, informative, intimate, filled with art you haven't seen or new slants on it.

Most of the crowd at Members' Opening Day was Ciwt's age, but this is a week/work/rain day.  Will younger generations start flocking to Warhol?  We'll see, but don't count him out. Turns out Warhol believed in resurrection, honestly thought he would live again after he died.  And maybe he was right.