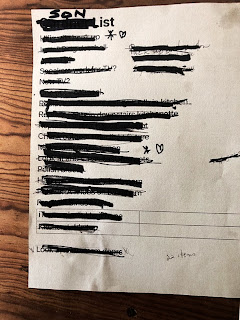 So the other day Ciwt realized she hadn't heard from a friend for a while.  Concerned that her friend had been overtaken by languishment - or worse - Ciwt texted her to learn a bit more about the silence.

Well, not only was Ciwt's friend not languishing, she had been busy completing a list of 22! household projects with her son.  'With' probably meaning she stood and watched her son.  And did Ciwt mention her son lives across the country?

'They' fixed all those daily glitches that can drive you nuts: doorbell that doesn't ring, smart tv you've forgotten how to communicate with, hard to reach ceiling lights that have burned out, doors that no longer close.   And 18 more until everything on the list had been scratched off (see above) and they both 'felt great.'  It sounded fun and fabulous.  Although, truthfully, one part of Ciwt was happy for her friend and another part felt a teensy bit sorry for Ciwt because all she has are cats.  If she handed them a list, they'd either bat it around or shred it. Sigh.