So, Judy Chicago, artist, politics aside.  That's is a very big aside for an artist who has worked on 'projects' that are virtually synonomous with politics her entire 60 year career.  But there are many interesting things to know about this super energized, talented and courageous woman.

1. Her artistic 'projects'  and therefore imagery include: Death (hers and species'), the Holocaust, Male Power, Birth, Feminism, Minimalism, Pyrotechnics.

2. She is 'outspokenly' passionate and direct about her 'projects.'  For instance, here is one of her 'male power' paintings: 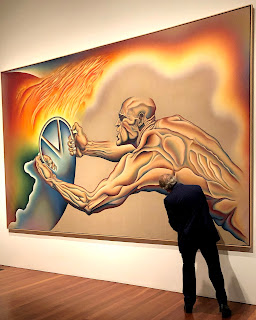 3. But she is not a hot head.  She puts at least six years of research into each of her topics, including reading widely, sketching, in-depth preliminary studies, prototypes in a variety of materials.   Her personal, prepatory notebooks are extensive and thorough: 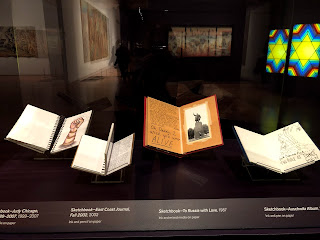 4. Ciwt thinks her color palette is nice to look at even though Chicago (nee Cohen) has been heavily criticized for it since graduating from art school 60 years ago. ('They' feel her colors should be more earthy, strong, male, or something).
5. She went to auto body school to learn welding and other techniques in the 1960's and was the only woman in the school.  This is one of the car hoods she painted back then.  Again, not taken seriously by the critics at the time.  Teenage boy car lover Ciwt would have loved it even then!
6. She was also the only woman in her training when she received her certification in pyrotechnics. 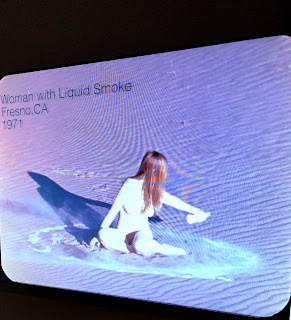 7. She carefully tailors her medium to her feeling about each of her 'projects.' For instance, some of the pieces in her 'death and extinction project' are cast in patinated bronze while her 'birth project' works are needlepoint - stitched by supportive volunteer needleworkers all over the world.
8. She has never been motivated by money and says she married one of the only other people who isn't either.  They have survived together (he is a photographer) doing whatever calls to them for 36 years.
9.  One thing she has done for money is write: art reviews, articles, books.  So she incorporates her writing in many of her works.
10. The deYoung Museum's retrospective is her first.  People have asked her if she is angry that it has taken 60 years for such a show.  She answers that she feels privileged to have been able to create in her studio all these years.
11. She was very moved by and appreciative of her retrospective.  She came in person to the press preview and 'surprised herself' by bursting into quiet tears from time to time when speaking or answering press questions. 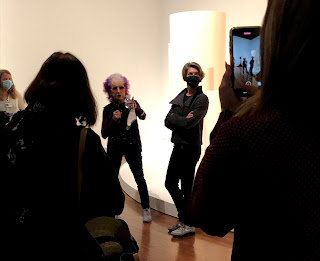