Who is this man?

If you guessed he's the man coming through the door to Maria's chambers as she is being dressed for her wedding to Alexis I in The Russian Bride's Attire, you're right! 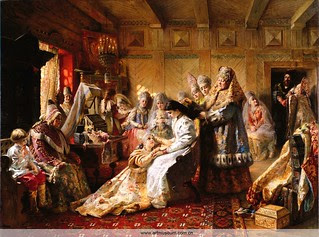 And, if after that, you have no further idea about his identity, you've joined most of the the rest of us. Even experts are not sure who he is or why he is entering the chambers usually forbidden to men.

Nor is the man the artist himself, Konstantin Makovsky. Although it is not uncommon for artists to include self-portraits in their paintings, Makovsky did not resemble this man. For one thing, two of his physical characteristics were very dark hair and large, bright blue eyes. (Tall and handsome too. Sigh...)

The man could be a simple messager bringing in a wedding gift. But I wouldn't be surprised if he is Makovsky's imagined image of Alexis' highest placed and closest advisor (or boyar), Boris Morozov. Morozov had in many ways placed himself in the midst of the wedding action. He had advised Alexis to marry Maria. When Alexis had acceded to the throne at age 16, he had been entrusted to the care of Morozov, so Morozov's wish was essentially Alexis' command. This advice regarding Maria followed the sickness and exile of Alexis' first choice in brides, Eufemia. And, here the plot thickens dramatically, because Morozov was strongly suspected of having poisoned Eufemia to induce her illness and to rid his enemy, the girl's father, into exile along with her. Finally, Morozov was engaged to marry Maria's sister, thought to be the girl at Maria's feet, and in fact did so ten days after the wedding in this painting.

We see a courtesan with her arms up trying to block the man's entrance into the chamber. However from all that we know of Morozov, he was not a man to be denied nor did he consider any matters at the highest level of the Russian court to be outside his sphere. So my bet is on him being the man in the doorway.
Posted by Ciwt at 3:33 PM