At today's docent lecture on the upcoming exhibition - Girl With A Pearl Earring, Dutch Paintings from the Mauritshuis - a couple of things particularly caught my attention.

The first was more information on how oil paints were actually mixed pre-tubes which I may write about at a later date.

But the main and most exciting discovery was a 17th C. Dutch artist I had not heard of: Carel Fabritius (1622-1654) whose self-portrait is here. 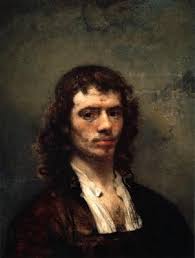 Fabritius studied at Rembrandt's Amsterdam studio when he was in his late teens and many consider him Rembrandt's most gifted student.  He made his short career in Delft where he is thought to be the only Rembrandt student to develop his own style.  Unlike Rembrandt whose brushwork was gestural and who used dark backgrounds with his subjects spotlighted, Fabritius used cool color harmonies to create shape in a smooth, luminous style of painting.  He became interested in the technical aspects of painting moving away from Renaissance perspective and chiaroscuro and explored complex spatial (almost trompe d'oeil)  effects as in A View in Delft, with a Musical Instrument Seller's Stall (1652).  He also taught himself to control a heavily loaded brush producing the haunting and technically proficient The Goldfinch. (1654)

Sadly, Fabritious's life was cut very short when he was caught in the explosion of the Delft gunpowder magazine in 1654.  The explosion destroyed a quarter of the city, along with Fabritius's studio and many of his paintings, so most of what he had produced by age 32 was lost along with him. One could speculate that Fabritius's name might be as well-known as Rembrandt and Vermeer were it not for this catastrophe. 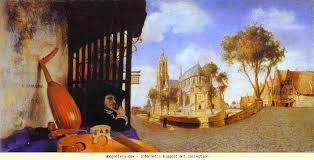