NO WAY!!  Forty Niners Win!!!   I watched some of the first half when Atlanta was scoring just about every time they had the ball and then let off a little steam so the Niners got some scores on the board but then pulled ahead again by 10 at the end of the half.  I was considering an art lecture, and made my assessment/decision: Niners are going to lose so the art lecture wins.

Usually when the Niners or Giants win you can feel it in the air.  Lots of energy, some horns honking .  There was none of that on my way home from the de Young so I was even more sure San Francisco had lost.  Until I checked in with SFGate......

It must have been an amazing second half!   Sorry to miss it, but Golden Gate Park was amazing too on this lovely afternoon and the lecture on Crown Point Press, Kathan Brown's Bay Area art treasure, was also excellent, informative - a winner.  Again the travails of living in the Bay Area.  (It would be something if we won both the World Series and the Super Bowl.  Just sayin...)

But my mind has finally recovered from the bathroom refinishing caper and I already had in mind talking about Golden Gate Park this gorgeous afternoon.  Brought to mind impressionist paintings as well as some of the 60's groups that lived near the park and were so much part of that scene: Jefferson Airplane, Grateful Dead, Mamas and the Papas to name a few. 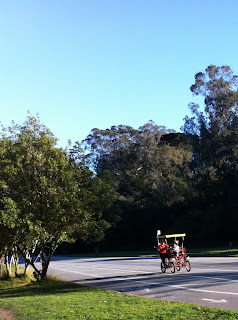 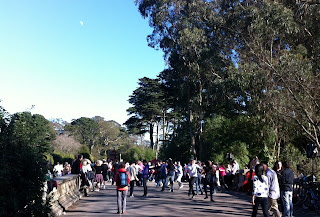 These people are dancing the Lindy Hop to Glen Miller's recording of Tuxedo Junction. 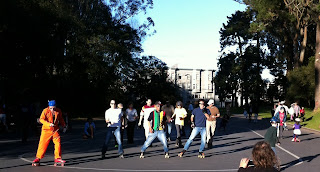 Didn't get the song but got the beat of these roller skating dancers. 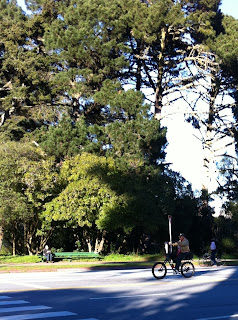 Man cruising in his 49er jacket.  Boy is he going to be happily surprised when he hears the news - like I was.  49ers Win!!