The pieces of some days never click together. This one began with watching a webcast of the funeral/memorial service for a close cousin in Montana.  Kind of odd on the face of it but actually a very nice and useful concept applying technology this way.  Getting to freezing, snowy, windy Montana on teaching day just wasn't doable so it was nice to 'be there' in this way.

Then on to teaching yoga where I have a problem of not knowing which room I'll be in each Saturday until the yoga teacher training ends.  Don't get me on this, but it is no small feat to move my students from room to room and recapture the yoga mood after they have set up. This too shall pass - at the end of February.

Then home for a long debrief/reliving childhood and beyond with my best friend growing up who had also watched the webcast.  And after that a call to give birthday wishes to her long ago-long gone boyfriend. Finally, a call from a bathroom refinisher to say that the postponed job is back on for Monday 8 a.m..

Meanwhile had turned on the Baltimore/Denver football game which was supposed to be a Denver rout and is now in overtime.  And the 49ers playoff game has just started.  So, now I'm hostage to football and my mind is even more like Johnny's brain on drugs than ever.

So, Ta Ta from CIWT til tomorrow.

PS - I like that I can see the Candlestick Park Lights out my windows off in the distance. Go 9ers! 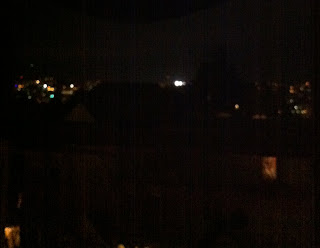