Walk: Round and round friend's houseboat
Distance: 8 blocks and private yoga practice

Had fun with a friend today rearranging furniture at her home.  What we arrived at could qualify for a photo shoot: balanced, symmetrical, harmonious but with playfulness and life.  One big piece of furniture had to be eliminated, but, even that had a happy ending when a very nice close neighbor spoke up for it and will take it away tomorrow.

There are those of us who rearrange like this and those who go out and 'solve' by buying.  If rearranging can be worked I feel this is where environments start accumulating soul.  As a piece one place 'evolves' into another place close to a piece which used to be downstairs or in another room, the environment takes on a freshness and at the same time an easy and lived in look.  Because, of course, the pieces have been lived in.  Chair cushions have inviting creases instead of being stiff and new, wooden patinas have mellowed and aren't mirror crisp and shiny.

This is my aesthetic anyway.  I do it with my cars which I pamper for at least a decade until they really have reached the end of the line.  Also homes; it is very difficult for me to unattach from homes - which CIWT readers may have noticed in some of my entries containing pictures of ones I grew up in.

There are many others who are exactly the opposite.  They rent: homes, furniture, cars.  Or they 'flip' houses.  Or they are forever re-decorating.  There was a very wealthy woman where I grew up who completely redecorated her entire large house - fabrics, furnishings, who know what else - two times a year, every year.  Her children grew up to be very odd - and this constantly changing/replacing environment must have played a big part in that.  How secure can you feel when your mother so routinely replaces things? What will she do with you when she's not pleased?  I think they might have lived in perpetual agitation which went with them the rest of their lives.

So, guess I'm a Buddha contrarian:  Judicious attachment is good. 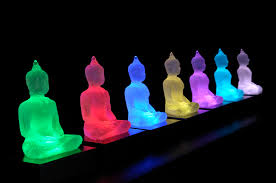