To my eye Wayne Thiebaud's palette and perspective has darkened a bit in his early 90's.  Seems appropriate.

A 2006 Crown Point Press print I saw recently at the de Young's Crown Point Press at 50 exhibition seems very poignant.  His whimsy is still there, but he also seems to bring in the fleetingness and eternal passage of life's playground, the lightness of being, and the formless vastness of the beyond.  Maybe none of those things are there, but the print haunts me for some reason.  Can't help but compare it with the robust, tactile, grounded sensuality of most of his work.  Witness the colorful, firm, full-bodied, earthbound bathing beauties below painted around the early 1970's.

And then here is the print that haunts me with its wispy, airy, circus like figures whose birdlike tracks will soon be washed up by the sea beyond.  2006 print, Tide Figures: 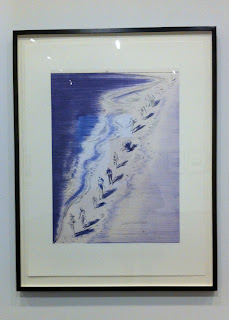 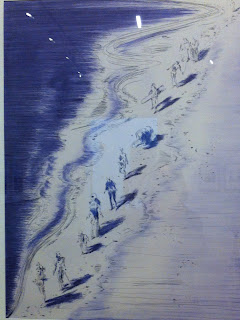 And finally here are some retrospective commentaries in video and print:
http://www.youtube.com/watch?feature=player_embedded&v=vI_QJ5D9Qm8
http://www.smithsonianmag.com/arts-culture/Wayne-Thiebaud-is-Not-a-Pop-Artist.html#
Posted by Ciwt at 6:44 PM