The Sapphires is so 'nice' and well meaning that you can't really speak against it.  Except to say it is a bit thin, not much depth.  At the end of the movie we were told that one of the real Sapphire's son was co-writer of the screenplay.  The picture with that announcement was of a boy about age 6, and you could almost imagine that a slightly older youngster who adored his mother and wanted to talk a bit about the 60's, Vietnam and the Australian Aboriginal situation might have had the main voice in this script.  It is light, very light.  Charming, enjoyable, appealing but oh so very, very light.

One thing I found interesting were the Vietnam scenes.  As shot in the movie, real life was going on, but at the same time helicopters were flying overhead and random explosions and gunfights signalled intense battles here an there on the landscape.  Usually when I've seen film of Vietnam it shows fighting but doesn't indicate that the land around the fighting is green and filled with villagers and other Vietnamese and American soldiers generally going about their business, engaged in their real lives.  I guess I didn't realize until this movie how much every day life co-existed with the war - if the movie indeed portrays reality.

There was footage of Martin Luther King, Jr., both assassinated Kennedys, references to James Brown, the Apollo, and other reminders of that fascinating time that was the 60's.  And this reminds me I will always consider myself fortunate - a complete lucky duck actually - to have been alive and just the right age during those times. 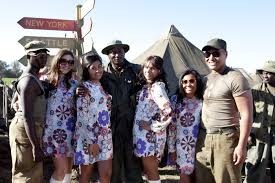