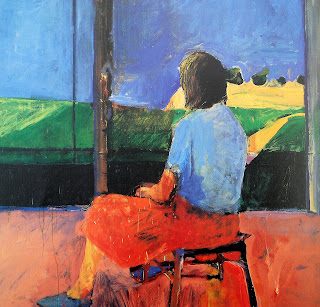 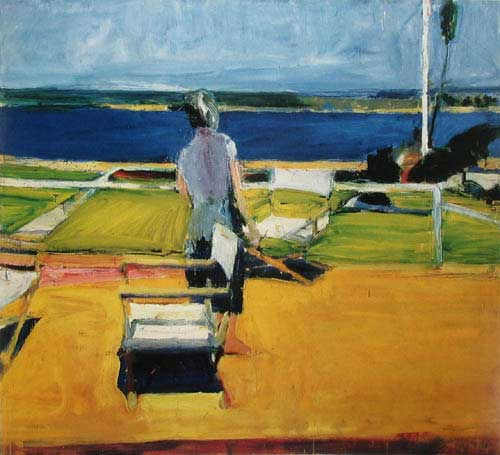 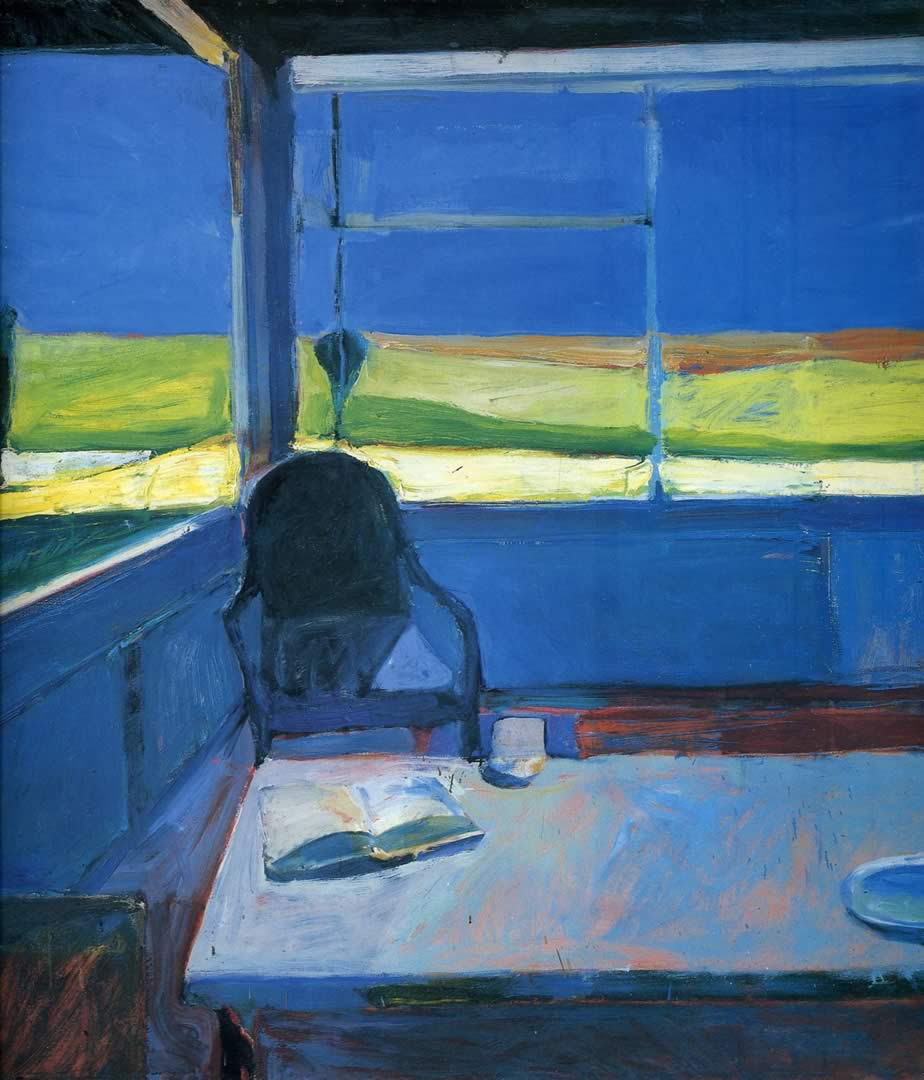 So, what is it about Diebenkorn's figurative paintings, Diebenkorn's people?  At the recently closed de Young Museum show of his Berkeley Years works, many people were up in arms about the 'negativity,' 'estrangement,' 'lifelessness,' 'ugliness.' of his figures.  They spoke up on docent tours, huffed away from them or simply wouldn't go into the show at all (which - sadly to me - was not particularly well attended).  Even some docents apparently had troubles presenting Diebenkorn - possibly because they privately agree with those who saw no interest or beauty in any of his work.

Surprise to me because I like Diebenkorn's art, all of it.  What his remote and quasi-alienated figures are all about is purely speculative because it was never his way to explain his art.  Much of what I see in his flat, remote figures; including the empty chair is some sense of his that ultimately individual people - even one's closest friends and mate - are unknowable.

I also see his own fluidly murky sense of himself as an artist at the time most of his figures were painted (and drawn).  He had estranged himself from the 'classic' San Francisco Art Institute scene by rebelling and dropping out.  The 'classic' scene at the time was exactly not that; it was enforced abstract expressionism because the Art Institute had determined that it must get 'up to speed' and leave fuddy duddy figurative and landscape painting totally behind.

So Diebenkorn as an artist was estranged from his art training roots.  But he was also internally estranged because he was truly unsettled about what his artistic interests and subject matters were.
And no one except himself could surface the answers. This bare bones, immersion into his personal artistic self, the empty, seeking 'non-self' shows up in the bottom painting of the empty chair.  (Chairs have a very long artistic history of being symbols for people).

He painted abstracted landscapes, then began to add a small figure or two into the landscapes. (Seawall) Larger figures began to appear- but still at least a sense of landscape.  In Man and Woman in a Large Room deep conflicts are portrayed.  The man appears to be an artist at his drawing table with a model (probably his wife as well because she was his constant model) in the room and has set up for a figurative painting.  But the angle of his chair is ambiguous.  Is he looking at her or out to the small landscape he has included on the right side of the painting?

Then there are paintings like Girl Looking at Landscape and Woman on a Porch in which the person and the landscape have equal import.  During this time when most of his figurative work was produced he seems to be nearing a private intuitive understanding that in some sense people, landscape, geometry and more are all one.  His deep resonance with landscape (and all it involved for him) as his vehicle for self-expression seems to be emerging and solidifying.  In fact, wherever in has career he was, I would surmise he was always fully immersed in his personal artistic quest for artistic and self identity.  He was the bare bones, seeking, not-quite-seen self with the open book in front of him in Interior with Book.