Day of Rest and now movie review catch up. 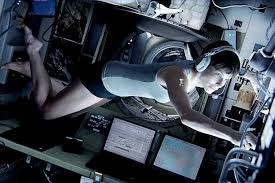 You kind of can't not go because of all the hype, and ciwt did.  Yes, on the visuals especially  if you're into outer space. Technically astounding I'm sure.  After that, the 'plot' is full of black holes. And I was irritated that Sandra Bullock is now even younger looking in her latest movie.  She wears a space suit and helmet for much of the movie and comes out of it for a while wearing tight spandex briefs and a scoop neck, sleeveless tee.  As filmed and age 49  (I believe), she has Barbie Doll plastic completely smooth skin, not one wrinkle, zero cellulite anywhere, thick brown hair which looks perfect no matter how many catastrophes she endures. She to me became more and more like Gidget Does Outer Space. The movie needed George Clooney (who is basically Sandra's age and, mercifully, looks it in the movie) to keep it 'grounded' and he does just that.

Just great.  I'm not a particular Tom Hanks fan, but his acting in this is at another level.  And right up there at that same level, is the Somali Captain (Barkhad Abdi, a Somali refugee who had not acted before being found by the director in Minneapolis). The other Somalis (friends in Minneapolis) are excellent as well.