The other day I went to an artist friend's studio and wanted to bring her something simple but special hoping her artistic soul would resonate.  Nearby my home is one of the top flower shops in I'd say the Bay Area, so I went in hoping.  And Voila!!!  The Most Gorgeous dahlia even they had ever seen.  To see it was to fall in love which I did then carried it in its tissue lined box to my artist friend who also fell in love.

That seemed to be sufficient, but we needed to go eat and she decided to carry the flower with her rather than leave it in the car.  And as we walked down the street, there was a domino effect. People would see the dahlia, stop in their tracks, rush over saying "What a beautiful flower!  Is it a Single flower?" (Yes) "Where did you get it?"   Person after person in this new, happening part of town.

Then we and the flower entered the coolest restaurant in the coolest part of town and several waitpeople rushed over to us. I should rushed over to The dahlia.  One waitress took it away and put icecubes around it so it wouldn't get too hot.  Then when the properly cooled flower came back, the bartender reached over the counter, took the flower and placed it in a prominent spot at the front of the restaurant.  We, without flower, were shown to our table and throughout lunch you could hear people oohing and aahing over the intense, red beauty.  Then after lunch it was back down the street to more gushing remarks and back to our car.

One flower spreading so much delight.  It was wonderful to be a part of. 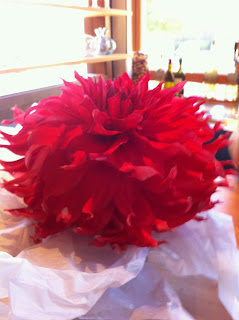 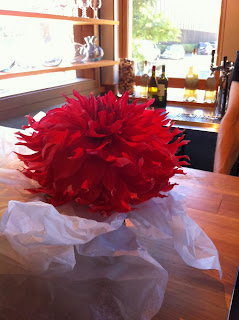