I was stopped the other day by a glass sculpture of a remote, almost trudging, possibly disturbed woman in a drastic yellow dress. As I came closer I was surprised to see it was by Nicolas Africano, an artist I was very fond of in the mid-80's.  I actually went to his gallery in New York hoping to own a piece of his.  But, alas, he was already way out of reach for ciwt.  After that, I continued to like his work, but it was as inaccessible as this woman: expensive, shows and reviews increasingly rare, and him out of the art scene back in his hometown, Normal, Illinois with his wife/model Rebecca.

I didn't know the de Young had an Africano.  We have a new director, Colin Bailey.  It is said he totally reorganized many of the galleries; I bet he found this in storage somewhere and had it put out.  I also didn't know Africano sculpted; I had only seen canvasses and works on paper. 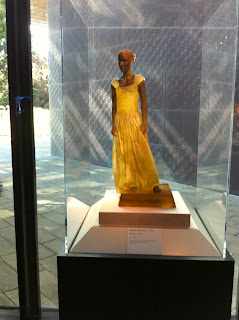 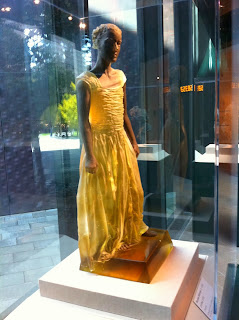 This may be titled Rebecca in a Glass Dress.  I will look for more details next time I'm at the de Young.
Posted by Ciwt at 6:23 PM