In his daring perspective, distortions, audacious use of light and color, eye for the inner life of his portrait subjects, elevation of the importance of landscape, his abilities as architect and sculptor,  El Greco was an artist like no other in his time and for centuries past that.  Slowly he became revered.  First, by Velasquez, then Cezanne, then the Blaue Reiter artists, certainly Picasso in his Blue Period and later by the other cubists, even Jackson Pollack and many other artists from Impressionism on. And since the late 20th century, he has been the subject of many major retrospectives abroad and here in the states and has a legion of supporters among museum personnel, art historians and critics as well as collectors.

But shortly after El Greco's death and for those unsung centuries, his art was in disfavor, overlooked, utterly forgotten. Certainly he did virtually nothing to court favor acting always with complete indifference to what effect his art and actions might have on others.  His religious views and painting style were entirely at odds with Philip II, the king of Spain and most powerful monarch in Europe.  It is testimony to his legendary 'arrogance' that El Greco continued to paint in his own unique manner in spite of Royal disdain and instead became friends with and was collected by the clerical and scholarly intellectuals of Toledo.  In fact his freedom from royal establishment patronage probably - along with his own deep independent streak - allowed him the very freedom he required for his difficult genius to flourish.  And flourish he did, living in a 26 room Toledo mansion, sometimes with a full orchestra playing as he dined.  Marching in and out of court he relentlessly hounded anyone who did not pay all monies owed him.

Until his death age 73 in 1614, he refused absolutely to accept the lowly, tradesman status of artists in his time.  Now, 500 years later, Domenikos Theotokopoulos basks in the prominence he spent a lifetime pursuing from his birthplace in Crete, through the workshops of the great Italian masters and finally to Spain where he became the iconic and controversial artist, intellectual and flamboyant businessman, El Greco and one of ciwt's favorite artists (in his late period). 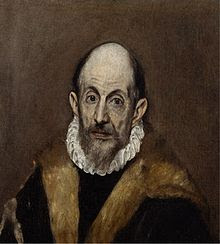