Walk: Vogue Theater (The Wolf of Wall Street - CIWT is trying to escape the turmoil of tomorrow's last Saturday yoga class.  Not quite working but still nice to have these movie openings as retreat), Trader Joe's
Distance: 2 miles, tiny bit of yoga 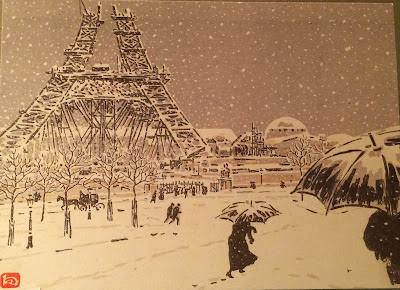 Another reason CIWT chose this holiday card as its 2013 winner is its near perfect embodiment of Japonisme.  The term is used to refer to the influence of Japanese art on Western artists, particularly those working in Paris in the later 1800's and particularly the Impressionists.

After more than 200 years of near total seclusion, the Japanese Shogun was 'persuaded' by the Kanagawa Treaty of 1854 to open its trade. And soon thereafter Japanese decorative and fine art goods began to flood European and American markets.  First to arrive in curiosity shops that sold Japanese goods in the 1860's, and highly influential, were the ukiyo-e Japanese wood-block prints which made a particularly strong impression upon Parisian artists.  Painters such as Whistler, Manet, Monet, Degas were fascinated by the quality of this work as well as its style which was so unlike Western art.  Particularly they were taken with the wide variety of subject matter, the flat perspective, the asymmetry or off-centeredness (often with a low diagonal), the light with no shadows.  All this was so different from the Greco-Roman teachings of the French Academy and began to confer more and more artistic freedom eventually inspiring in fine art Impressionism, Art Nouveau, Cubism and other modern movements.

Nor was Japonisme confined to art.  It was heavily influential in music (The Mikado, Madama Butterfly), theater, ceramics, wallpaper, furniture and graphic design, textiles, cloisonne enamel work, jewelry, clothing, hair style as well as the open verse of modern and imagist poetry and other literary forms.

Before ending, I have a PS to yesterday's entry speculating that the Eiffel Tower might have been controversial during its time.  Turns out, I'll say!  Here is an excerpt from a petition by 300 of the most prominent French art establishment figures:

"We, writers, painters, sculptors, architects and passionate devotees of the hitherto untouched beauty of Paris, protest with all our strength, with all our indignation in the name of slighted French taste, against the erection…of this useless and monstrous Eiffel Tower … To bring our arguments home, imagine for a moment a giddy, ridiculous tower dominating Paris like a gigantic black smokestack, crushing under its barbaric bulk Notre Dame, the Tour Saint-Jacques, the Louvre, the Dome of les Invalides, the Arc de Triomphe, all of our humiliated monuments will disappear in this ghastly dream. And for twenty years*…we shall see stretching like a blot of ink the hateful shadow of the hateful column of bolted sheet metal."

(Guy de Maupassant, one of the principal signers, supposedly ate lunch in the tower's restaurant every day because it was the one place in Paris where the tower was not visible).

* Originally the Eiffel Tower was to be disassembled after 20 years.