Largely developed in Italy where they were designed mostly by architects and sculptors, picture frames - along with all the arts - came into their own in Renaissance France.  Workers - even Leonardo da Vinci - flocked to France where art was flourishing as a daily part of life.  Frames were now designed by furniture builders and specialized motifs and styles developed. These traveled through the continent, England and abroad through widely distributed pattern books.

With increased specialization came increased expectation - especially among the French royals - and very wide gilded frames of different motifs were the order of the day until Louis XIII:

Under Louis XIII's reign the emphasis was on refinement, and thinner, continuous design (eg, egg and dart, ribbon and flow of leaves) frames came into fashion.

Then enter the Baroque era in which, in opposition to refinement throughout the continent, Spanish, Flemish, and Italian influences were all at work to produce dramatic, curvaceous frames.

The Dutch, in their golden age at this time, and categorically against ostentation, were the single exception to exuberant framing preferring the 'dignity' of ebony or ebonized frames. 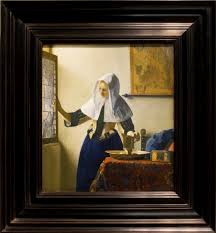 But, shortly even the Dutch collectors aspired to be the equal of French and other continental collectors and began to frame their art in gold frames - the more exquisite the better.

The burgeoning of picture framing along with mass production began to lead to other debates within the art framing world which ciwt will visit another day......