Walk: Trader Joe's
Distance: (cold) 2 miles and small home yoga practice
With frames now an entity in their own right, the element of personal choice became more prominent.  We all know how difficult it is to choose a frame for our artwork, along with the mat or two mats or maybe an inner liner or maybe..
As this matter of choice affects museum art/historical paintings, it creates a situation where it is very rare for the work to be in its original frame.  Collectors through the ages have virtually always reframed their art to their own tastes and often with a family crest prominently on the frame to make clear to all who the owner is. 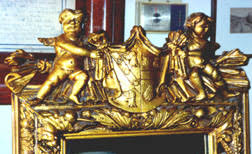 In this example, the family
crest is suspended between two cherubs.
A notable example of a painting that hangs in its original thin wooden frame painted deep olive green is in the de Young Museum American collection:
Attributed to the Freeke-Gibbs Painter, David, Joanna and Abigail  Mason, 1670, oil on canvas
This unusual circumstance is attributed to the facts that the painting sat in a family attic for centuries and when it was found and put at auction in the middle 1900's, the buyers, Mr. and Mrs. John D. Rockefeller, 3rd, were wise enough to know that the original frame was an integral part of this very early Colonial treasure.
Personal choice in frames is often a large and controversial issue with the artists themselves.  Most of The Impressionists  actually favored elaborate, old master-type gilded frames for their works (surprisingly).  One reason for this is that the frames continued the work of attracting light and sparkle to the paintings.

Claude Monet, The Seine Near Giverny, 1888, Oil on canvas

But not so Edgar Degas who felt so strongly that his works should be in simple, flat (like his images) frames that he created them for many of his pieces and insisted to his dealer(s) that they stay in these frames.

Edgar Degas, The Orchestra at the Opera, 1868, oil on canvas

I don't know how they handled the situation, but the dealers would have none of this. The drab artist-made frames had no appeal for the buying public, and to please the public and attract sales they went ahead and reframed Degas' work in frames popular in their day.
These dealers may have succeeded in going against Degas' wishes, but galleries and museums would not have a chance with many modern artists who insist that their art remain Unframed - even make it nigh impossible to frame.