About to leave for a holiday trip, my downstairs neighbor called to say he had a pretty poinsettia that would probably die before he returned and would Ciwt like it.  Well, no, actually Ciwt doesn't particularly like poinsettias.  But of course I said yes to help him out, figuring I could put it on a hall table  or something.

He left it down by my front door and, yikes! 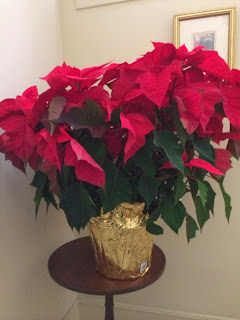 2.5' high/3 ' across. No way it would fit on my little entry table, and it took up nearly my whole landing. 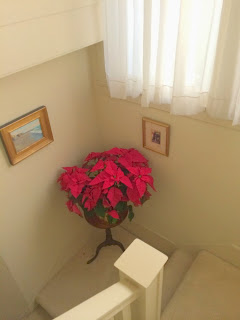 For a non-Christmas, non-poinsettia person, this was too much.

So, what to do?  Warning them ahead about its size, I brought it to my yoga studio and they scratched their heads because it was too big for them as well - except way on the top of a bookcase or something.  As we were discussing its fate, one of my students walked by and said he had two plants just like it and would love to have a third!  So he ended up happily walking out from his massage carrying the big red plant to be with others in his large Victorian home.  But as he walked through the door, the huge plant brushed against the frame and two fronds snapped off.

I picked them up, brought them home and now have just the right amount of poinsettia cheer around here. 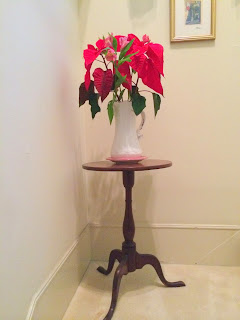 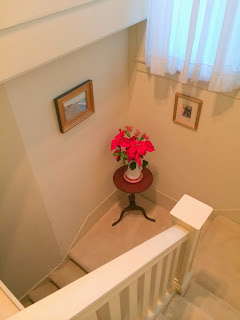 In the course of the Great Poinsettia Saga I became a bit more curious about poinsettias.  Here are a few things I learned:

They are native to Central America and were used by the Aztecs as medicine for fevers. They get their name from Joel Roberts Poinsett who, among many prominent political positions, was the first U.S. Ambassador to Mexico in the 1800's where he first saw poinsettias in bloom.  Being an amateur botanist he had cuttings sent to his greenhouse in South Carolina, and when he returned to his plantation in Charleston he cultivated the plants and gave them to friends, family and other botanists.  Eventually the plants were cultivated commercially and named in honor of Poinsett.