A friend recently asked if I'd seen The Great Beauty and, if so, what I thought of it.

From time to time Ciwt is forced face-to-face with what a lambie pie she still is in certain areas. Her recent viewing of The Great Beauty was such a time. I loved the The Great Beauty, movie that is the equal of the city it portrays.  I simply cannot imagine having the talent and sophisticated understanding to wrap my mind, my creative being, and, in this case, camera around the gorgeously complex tableaux that is Rome.

Ciwt remembers her first moments in Rome.  A long plane ride, customs, a short train ride into the city and, then, alighting, a flurry of gypsy children rustling newspapers, tugging on my garments, falling/faking injury, any tricks at hand to divert attention so they could grab my purse, suitcase, wallet.  It was such an unexpectedly abrupt change of mood, energy and really the world as it operates in the States.

This was not your carefully plotted type of robbery of American caperdom - nor even the exciting shoot um up of Billy the Kid and Bonnie and Clyde. I had money, they wanted it, and, furthermore, they were going to take it if I did not defend against it - all directly in front of the Italian authorities.

From that introduction there were constant reminders of the eternal power grab that has always existed even as the "Eternal City" the "Capital of the World" was somehow and gloriously built. What better symbol of architectural excellence, extreme brutality, human sacrifice, mixture of politics, spectacle, religion and power than The Colosseum?

Ciwt found all this palpably dangerous energy amid the architectural and natural beauty alluring.  So alluring she has harbored a yearning to perhaps spend some 'quality time' in Rome.

After seeing The Great Beauty last week, this yearning is under revision - or rather in the process of maturing.   Concentrating on the highest social eschelon, the movie glides beautifully like a soaring bird through all the decadence, corruption, evil, cruelty, sickness, death, ennui, tragedies, that still permeate and determine the heart of Rome.  This Rome: richly elegant, gaudily predatory, old, dying, alluring, creepy, crepey, an alive museum, gorgeously fantastical.  A spectacle of Beauty, Ancient Treasures, many privately owned, Fabrics you can feel with your eyes, Huge Jewels, Euro-Trash Nightlife.  The Rome in The Great Beauty is a series of fantastical but real tableaux.  So, so far beyond Ciwt's ken, that had she gone again to Rome without seeing The Great Beauty, she might have been a lamb devoured by the founding wolf cubs still foraging through the city.

I still yearn for more time in Rome, but now feel more humbly and realistically positioned for the journey if it comes to pass. 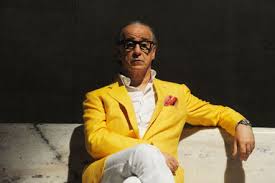