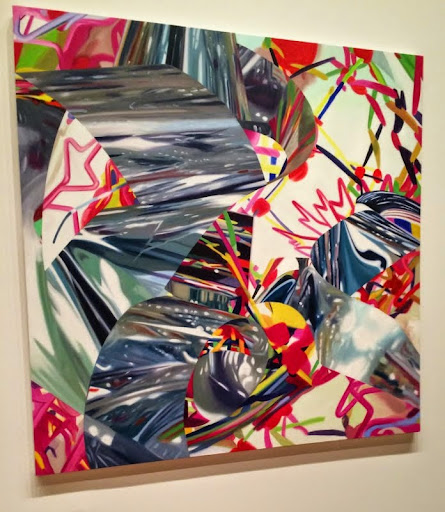 There is something so energizing, exuberant - and to Ciwt joyful - about James Rosenquist's work whether it is one of his often enormous prints* or a work on canvas like the one above from the Meyerhoff Collection.  Every work of his is exploding off the canvas or paper, yet simultaneously contained.  He might start an image in the middle, toss it up in the air, have it run into by the next image but the viewer is not overwhelmed with chaos.  Rosenquist has clearly made and controlled these kinetic choices - usually making visual stories - and provided a vantage point for the viewer to reconsider familiar objects and how they interrelate with each other and ultimately, he hopes, his mind**.  All of which is not so say many of viewers don't feel breathless and/or confused.

* Scale, size and space have always been crucial for Rosenquist - who actually started painting billboards.  His print, Time Dust (1992) is thought to be the largest print in the world at 7' x 35.'
**In his 2009 memoir Painting Below Zero he wrote "I want people who look at my (works) to be able to pass through the illusory surface ..and enter a space where the ideas in my head collide with theirs."