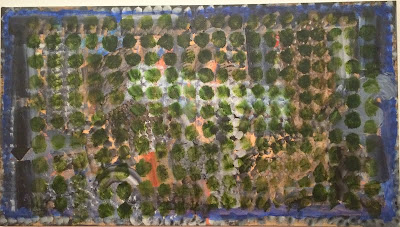 During a viewing of the Meyerhoff collection at the de Young, Ciwt's attention was riveted by a lushly compelling work painted by an artist she had never heard of.  Turns out the woman next to her was English, and she said "He's British, his name is Howard Hodgkin*;  he's very well known over there."

As well he should be!! The exact meaning of the painting Ciwt was viewing is hidden, but the work is so richly expressive, so masterfully handled, so layered and nuanced there is a feeling sense to it all that draws you in and holds you.  Something is so nice and lovely about this unknown place that your eyes and emotions don't want to leave.  Ciwt would not review an artist on just one painting, particularly an early one like this, but she has a sense all Hodgkin's work is exquisitely painterly and you would find in all of it that enigmatic but strong emotional charge.  As one reviewer put it about him: Hodgkin has been manipulating colour for 60 years and he can make it say exactly what he wants it to.

*Sir Gordon Howard Eliot Hodgkin that is.
Posted by Ciwt at 6:21 PM