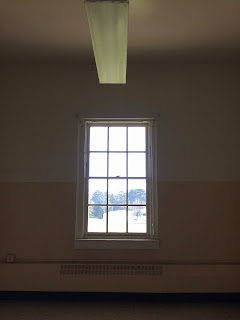 Pretty gloomy, yes?  This room would have had bunks or cots for at least 12 men, and the sturdy trees out their window probably would have been a few feet high if they had been planted at all.

Still is gloomy.  When the Army's Artillary Coast Division - which was headquarted in Fort Scott - was terminated in 1950, the men just clicked their heels together, marched out and left all 22 buildings as is. 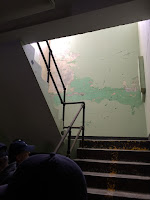 Architecturally this was bad news, but the wildlife around Fort Scott's virtually unattended parade grounds were delighted 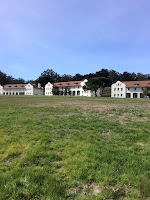 .  Gophers dig holes galore which unearth rodents and other prey for a variety of owls who are stalked by eager cayotes and maybe a few foxes.  Meanwhile the birds chirp.  Apparently it is quite a hunting party at daybreak.  And the Presidio Trust wants to keep it that way: wild and natural.

This month the Presidio Trust began seeking proposals for "..a once in a generation opportunity to make a place for change in the world" from "organizations interested in and capable of revitalizing the site as a campus addressing contemporary environment and/or social challenges."

Last weekend Ciwt toured the gorgeous site, and realized the extent to which "capable of" is key to the operation. Any number of organizations and causes would be interested in an iconic, historical campus contiguous to the Golden Gate Bridge, but which ones can take on such a project? Whoever it is will be responsible for tackling virtually everything:  electricity, plumbing, handicap accessability, architectural retrofitting and restoration, environmentally friendly parking just for openers,.And through it all they will be required to work within the Presidio's strict historical structure guidelines and likely City, County and State permits as well.

Ciwt thinks this is exciting.  Often she laments the enormous new wealth around San Franciso for its impact on traffic, congestion, construction, cost of housing and general quality of life in San Francisco.  But, this undertaking seems different, and the Fort Winfield Scott project is definitely going to take an organization with that kind of wealth.  (Preliminary estimates are $200 million just for infrastructure).  She's optimistic the right new tenant will show up and sincerely hopes whoever it is has Vision even more vast, promising and good for the world than their wealth