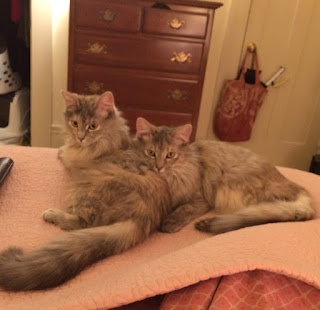 So when Ciwt was under 'house arrest' with her knee injury she spent months dreaming of complete freedom.  It was a vague but perfect zone: maybe she would whisk around the world, take road trips at the drop of the hat, wake up in the morning, drive to SFO and just get on a plane to wherever she wanted to go that day.

After she got out and about, she somehow forgot about her upcoming round the world excursions and slowly started dropping in on local pet adoption shelters.  "Just to look."  The looking had its pitfalls because (like most people) she started to sympathize with cat after cat who looked at her with "Save Me" eyes.  So, to create boundaries for herself, she made a list of the qualities she wanted in a cat (bonded pair of females actually) - a  list so demanding there was no way the perfect cats would show up.  So Ciwt had her cake and ate it too: Her vague perfect freedom world and her unfulfillable cat list.

But then it happened 😕: a beautiful bonded pair of soft, healthy, friendly females showed up at one of the shelters with every quality on Ciwt's list (except being declawed which is actually outlawed in the Bay Area - for good reasons).  Temporarily oblivious to her future round the world excursions, Ciwt drove her new car over to the shelter within hours of the cats' arrival, adopted them on the spot and whisked them home.

Then she watched them happily settling in (and tracking litter) to the nooks and crannies that had been all (cleanly) Ciwt's. The nooks and crannies that also contained all Ciwt's international adventures, spur of the moment excursions and road trips.  It has been three weeks; the cats seem to be adjusting easily and Ciwt is slowly (sadly) letting go of her chimerical* future life.

Articles abound about the shelter transition for cats, but humans go through our transitions too.

*Chimera:  2. a thing that is hoped or wished for but in fact is illusory or impossible to achieve.
Posted by Ciwt at 12:44 PM