Walk: Union Square, Legion of Honor
Distance: A few blocks, drove new car which Ciwt is beginning to really like (including automatic transmission even😊) 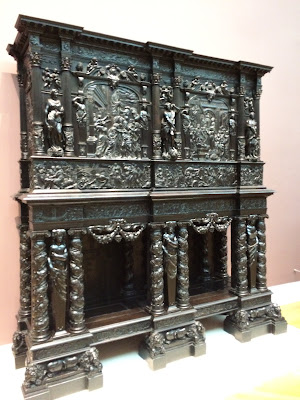 Say what you will about traditional art and furniture making, every time Ciwt encounters this huge cabinet at the Legion of Honor she is awed.  It was made in Paris @1650 by Pierre Gole the premiere
cabinet maker in all of France and Cabinet Maker to Louis IV.  It would have been impossible to be more highly regarded than that.

The massiveness gives the cabinet grand presence, but what is truly remarkable is that it is elaborately carved from ebony.  That is like carving in exquisite detail from diamond - and with hand held and relatively primitive tools.  Unfortunately for security reasons the cabinet doors cannot be opened in the museum.  If they were open viewers would see more than thirty drawers and, incredibly, a theatrical tableau with gilt-bronze characters enacting the Judgement of Solomon, before a green gemstone background. 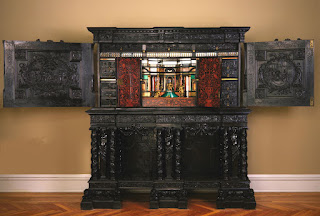