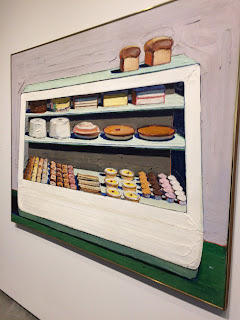 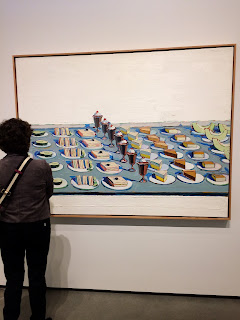 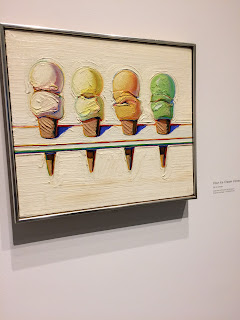 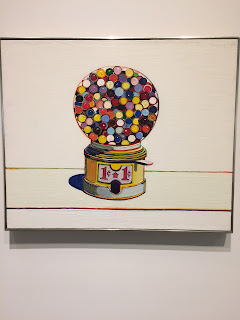 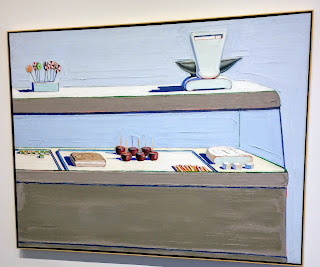 What a once in a lifetime treat it was to see a show of over 60 earlyWayne Thiebaud paintings gathered and exhibited on the UC Davis* campus where he was a founding faculty member and professor from 1960 to 1991.

Once upon a time nobody had seen Wayne Thiebaud's now iconic gleamingly frosted cakes, luscious ice cream perfectly perched on cones, colorful gumballs without a single one missing from the globe,
candied apples, decorative suckers, unsliced bread loaves all ready to be taken out of their cases.  That is, they had seen the objects all over - at bakeries, truck stops, delis from coast to USA coast.  But they hadn't seen them painted in their pure, alluring, neon and pastel colored glory.

And once upon a time nobody, most of all denizens of the art establishment, had a clue what to make of Wayne Thiebaud and his paintings of American delights.  Some tried to call him a Pop Artist, some dealers went with Realist or tried other categories.  But he didn't fit; his iconography was new.

Others tried to write about him but kept being confounded.  Then in 1962 before an early individual show he himself made a still definitive statement about his art.  In part he said Each era produces its own stilllife...I try to find things to paint I feel have been overlooked...My interest in painting is tradional and modest: I hope that it may allow ourselves to see ourselves looking at ourselves.  At the end of his statement he concluded: Of course, I hope the paintings speak better for themselves than I do.

Ciwt (among many others) feels that artist's early hope has certainly been realized.  Wayne Thiebaud is now in his late 90's, still traditional and modest, never self-promoting or signing on with an aggressive dealer who (if they could have made him) would have had him cranking out work after work after work.  He's also one of the country's most learned scholars and admirers of art history.  That history is embedded in his art and Ciwt (among many others) is sure critics and the public will come  to value more completely the deep intelligence, technical proficiency and bedrock love of art and life behind those dazzling but confounding images.