In college I did my senior art history thesis on a comparison between Picasso's Guernica and Hemingway's For Whom The Bell Tolls as statements about the Spanish Civil War.  It was a rich topic and I had particular fun "decoding" Picasso's symbols in Guernica -  as have scholars and writers since the painting was unveiled in 1937.  To date there has been no agreement about the meaning of Guernica's symbols and interpretations have been widely various and contradictory.  Despite the enormous interest the painting generated in his lifetime, Picasso obstinately refused to explain Guernica's imagery. Guernica has been the subject of more books than any other work in modern art and it is often described as..."the most important work of art of the twentieth century," yet its meanings have to this day eluded some of the most renowned scholars. So it will never be known whether my senior thesis point of view was correct or not.  Of course, I think it was.

I'm tempted now to "decode" Boy Leading A Horse (1906) another famous Picasso painting which also has confounded scholars and led to widely diverse interpretations.  The painting has an interesting and at times controversial history of ownership/provenance having once been owned by Leo and Gertrude Stein and ending at New York's MoMA as one of the two most important and valuable paintings of the Paley Collection donation.  (The other is Cezanne's L'Estaque*).  I have many thoughts about the horse, and the fact that the boy does not actually have reins in his hand - all of which are right of course.  And I am absolutely correct in 'knowing' the boy to be Picasso himself. 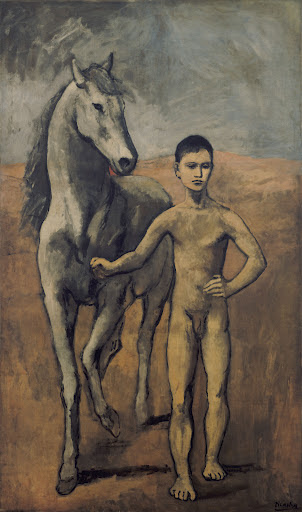