According to the government, this "combine"  (a kind of large-scale, three-dimensional collage that includes photographs, pieces of wood, a mirror, a pillow and a stuffed bald eagle)1. is appraised at $65 Million, and the heirs owe over $40 million in taxes if they keep the work in their collection.  But, according to MoMA to which it was donated and the heirs who received no tax advantage for the donation, the work is on the books as Worthless/$0.  After years of wrangling, the government accepted this arrangement withdrew its tax bill, and MoMA unveiled this extremely significant addition to its collection late last month - where it will join five other Robert Rauschenberg combines. 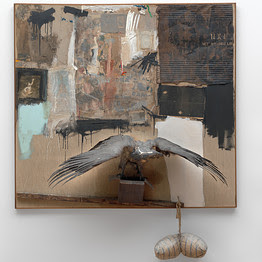 The legal story is so complex I suggest you read it for yourself (along with a personal opinion) in a December 2 Wall Street Journal article by Eric Gibson. (Or just view the related video). A single sentence quote from it gives a 'feeling sense' of the article:  The arrival of "Canyon" at MoMA is the culmination of a five-year absurdist farce—one tinged more by Kafka than Feydeau—that involved the IRS, the U.S. Fish and Wildlife Service and the heirs of art dealer Ileana Sonnabend. It might have been laughable, except that the stakes were so high.

I don't know; I don't usually side with 'Authority/the IRS" but, even if they had to do it in an absurb way or just stumbled into right action in the process of being absurd, I think the government's actions on behalf of protecting wildlife was the correct priority.  To me there does need to be a barrier between dead animals (not just Bald Eagles) and "art."  But, thinking of all those moose heads and dead fish adorning fireplaces, bars and hunting lodges, I wonder where that barrier is.