This time of year puts me in mind of the Town House, my grandparents' house in the city.  We always went there at Christmas - the whole family.  We had drinks (another story) and ate dinner (lunch) upstairs.  My favorite was always the peppermint ice cream at the end in the shape of Santas and Christmas trees.

Then after the meal the door was opened to the downstairs ballroom and the 'special present' was exposed.  My grandfather was a gadget addict so the special present was some gadget he'd been attracted to that year.  One year it was remote cars we all rode around in, another year it was roller skates and the whole family skated around the ballroom.  There were pedal tractors, electronic airplanes and other 'special presents' I can't recall.  The women and even the girl cousins were only mildly entertained, but the boys always went Nuts!  Which was what my grandfather had in mind.

The Town House was a 'miniature Georgean' built in 1923 and had 8 bedrooms, 6.5 baths, and a large gracious winding staircase. The sconces were silver, the dining room had large panels of Greek gods and goddesses, and the furniture was mostly acquired on trips to Europe. The garage was freestanding, as big as a house and had stalls for 6 cars on two levels. One museum curator deemed the Town House the loveliest house in the entire city. A wealthy man who married one of my cousins stood quite struck when he was first brought to the house and finally said "Some pad!" It really was impressive in its proportions and tasteful details.

The era was still one where many events happened at home.  My parents were married at the Town House, and sadly a funeral was held there.   My grandfather loved parties, and they were pretty much continuous.  During the Prohibition/bootleg era I'm sure there were numerous ones where the "special presents" were liquid and spirited.  In my era the parties were big and always had a piano player and people standing around singing.

My grandmother died here in the 1980's, and shortly afterward the house was sold.  In the city where it stands it is rumored that the house has ghosts, and I, for one, believe it. 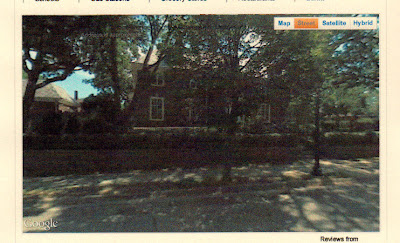