Some artists evolve (at least in the eyes of their patrons and art historians) and others devolve among the same viewers and collectors.  In my research on Derain I find I'm not alone in feeling he devolved.  According to Lucie-Smith in his book on the lives of 20th C artists*: Of all the major figures in the Ecole de Paris, Andre Derain's reputation has sunk into the deepest trough.

Abandoning Fauvism, Cubism and all pre-WW I modernist movements in favor of French neo-classicism was the top level of that trough in my opinion.  The lower levels of the trough include making a sizable income from painting stage sets, ultimately preferring drama/the stage to painting, hobnobbing with wealthy collectors, and, perhaps lowest of all, accepting an invitation by Hitler to come to Germany as his guest.  In joining Hitler, he symbolically joined with Hitler's glorification of classical art and derision of modern art which he confiscated (or somehow acquired), deemed 'degenerative' and displayed in Germany as such.

My personal sense is that the painting I love, Derain's fauvist masterpiece (Bridge over the Riou, 1906 - see Day 344) and his other successful fauvist paintings were never really deep in Derain's artistic vocabulary. At the time he painted these his best friend was Maurice de Vlaminck, and the two young men together were graced with the friendship of Matisse.  The three discussed painting in the cafes of Montmartre, critiqued each others' works, and I would say both Derain and Vlaminck were basically standing on Matisse's artistic shoulders during the fauve period.  Almost as soon as life took them in different directions from Matisse, both artists abandoned bright, clear colors and eventually embraced neo-classicism and a wealthy bourgeois lifestyle and company.  Vlaminck too went to Germany at Hitler's invitation.

Matisse, again in my opinion, went on to glory. 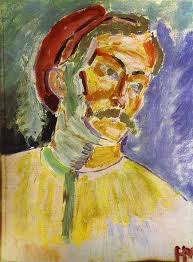