I read recently that Javier Bardem was in a full blown depression during the shooting of No Country for Old Men.  The reason: the haircut the Coen brothers conceived for his character Anton Chiguhr.  The haircut that was enough to send chills down your spine the moment you saw it if you went to the movie.

The haircut that wasn't a wig.  Bardem couldn't lose the look the entire time of the shooting - and and apparently it wasn't just the movie audience that got chills when they saw Bardem/Chiguhr.  Ordinary people at restaurants, grocery and drugstores, gas stations, wherever - ordinary people got very nervous wherever they ran into him.  According to his co-star Josh Brolin, "He stayed home for hours on end. He would not go out."

Bardem himself says the haircut had so much power over his psyche he was terrified for his future sex life; convinced no woman would ever want to have sex with him again. Even after winning the Oscar for Supporting Actor, he still hadn't totally forgiven the Coen brothers for the haircut.*

Bardem terrified?  Bardem thinking no woman would/could be attracted to him?!  News like this about beautiful people always amazes me.  I remember the younger Michelle Pfeiffer saying she never thought she was pretty. Apparently whenever she looked in the mirror all - all - she saw were what she thought were her big lips.  These stories go on forever but are still so difficult for ciwt to comprehend, really grasp. Maybe I should say, poor, shallow ciwt... 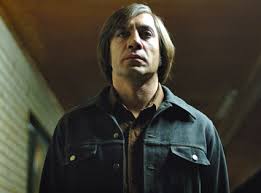 Guess he did relax about the weird hair concept after Oscar 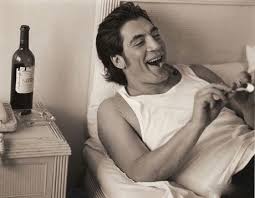 *Because here's his hair as Raoul Silva in Skyfall: