It has been such a long time since I've seen an actual painting by Richard Diebenkorn.  Even out here in the Bay Area where he was born, educated and spent much of his career, there are very few of his paintings in museum collections.  There are many prints because he was one of Crown Point Press's premier artists and of course wonderful posters of his paintings abound.

But, just a mile or so from here are hanging at least 60 full size paintings assembled from the finest collections and museums.  And, OMG, as they 'say.'  What you cannot see in the multiples on paper is the Brushwork.  And if you can't see Diebenkorn's brushwork, you can't see his soul.

And the reverse.  The poignancy of his brushwork is incredibly touching.  You can get lost in a small (let's say 6" x 10") section.  Lost.  And then when your eye moves to the next or another section, it is as if the world moved.  He paints his deep truth - or lets it well up through his brush - stroke by stroke.  And you can see this, and it is very intimate and, as I say, touching.

Nothing false here.  'Polyanna' was his stated aversion.  In his Note #8 in the Notes to myself on beginning a painting discovered after his death, he wrote: Keep thinking about Polyanna.*

Until today when I finally was graced with this full exposure to Diebenkorn's Berkeley Years paintings I've thought he was mostly about the abstracted California-inspired landscapes and, often in front of them, flattened quasi-abstracted figures.  And exquisitely, richly but also softly beautiful colors.  Matisse colors.  And these are certainly enough.  The forms and the colors.

But they don't convey the soul of the man, the depth and spare truth he was probably compelled to seek.  This is in the brushwork.

I hesitate to put an image here because it necessarily obscures the lyricism and leaves only the abstraction.  But then the colors are so lovely and moving, so... 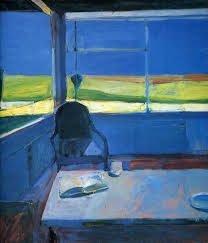 Seawall, (Berkeley Years)
(I'm not as drawn to this one as others, but it begins to illustrate/capture the brushwork)

*The following list was found among the papers of the painter Richard Diebenkorn after his death in 1993. Spelling and capitalization are as in the original. (Via Terry Teachout.)

Notes to myself on beginning a painting