Pretty varied day, but now my creative abilities seem to have been siphoned off by the movie I just saw, Fill the Void.  So, with no input from CIWT here directly from the local newspaper is its description along with a picture of the leading actress and movie brother-in-law/maybe husband.

An intimate, insightful, respectful and moving film which follows life among the ultra-Othodox Haredim Jewish community in Tel Aviv, Israel. The well-to-do family of Rabbi Aharon suffers a tragedy when his daughter Esther dies in childbirth. A younger daughter, Shira, 18, is pressured by her mother to marry her deceased sister's husband. 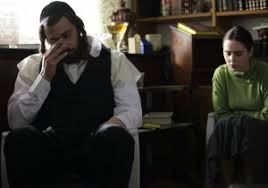 So much in the movie is about centuries old prescribed behavior it is hard to bust out into originality to talk about it. But giving it the old college try:  An interesting look into a hermetic community, well-acted, different, not necessarily thought-provoking but thought/worldview expanding.